Encephalitis is an acute inflammation of the brain.

Encephalitis with meningitis is known as meningoencephalitis. 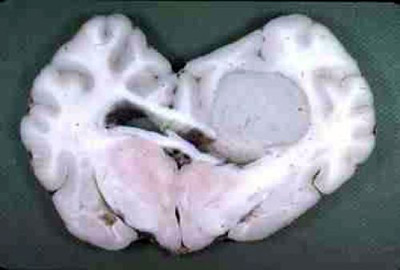 Viral encephalitis can be due either to the direct effects of an acute infection, or as one of the sequelae of a latent infection. A common cause of encephalitis in humans is herpes (HSE).

Another cause is granulomatous amoebic encephalitis.

Patients with encephalitis suffer from fever, headache and photophobia with weakness and seizures also common. Less commonly, stiffness of the neck (nuchal rigidity) can occur with rare cases of patients also suffering from stiffness of the limbs, slowness in movement and clumsiness depending on which specific part of the brain is involved. The symptoms of encephalitis are caused by the brain's defense mechanisms activating to get rid of the infection. Other symptoms can include drowsiness and coughing.

Neurological examinations usually reveal a drowsy or confused patient. Stiff neck, due to the irritation of the meninges covering the brain, indicates that the patient has either meningitis or meningoncephalitis. Examination of the cerebrospinal fluid obtained by a lumbar puncture procedure usually reveals increased amounts of protein and white blood cells with normal glucose, though in a significant percentage of patients, the cerebrospinal fluid may be normal. CT scan often is not helpful, as cerebral abscess is uncommon. Cerebral abscess is more common in patients with meningitis than encephalitis. Bleeding is also uncommon except in patients with herpes simplex type 1 encephalitis. Magnetic resonance imaging offers better resolution. In patients with herpes simplex encephalitis, electroencephalograph may show sharp waves in one or both of the temporal lobes. Lumbar puncture procedure is performed only after the possibility of prominent brain swelling is excluded by a CT scan examination. Diagnosis is often made with detection of antibodies in the cerebrospinal fluid against a specific viral agent (such as herpes simplex virus) or by polymerase chain reaction that amplifies the RNA or DNA of the virus responsible (such as varicella zoster virus).

Treatment is usually symptomatic. Reliably tested specific antiviral agents are available only for a few viral agents (e.g. acyclovir for herpes simplex virus) and are used with limited success for most infection except herpes simplex encephalitis. In patients who are very sick, supportive treatment, such as mechanical ventilation, is equally important. Corticosteroids (e.g. methylprednisolone) are used to reduce brain swelling and inflammation. Sedatives may be needed for irritability or restlessness. Anticonvulsants are used to prevent and treat seizures.

Encephalitis lethargica is an atypical form of encephalitis which caused an epidemic from 1917 to 1928, resulting in millions of deaths worldwide. Those who survived sank into a semi-conscious state that lasted for decades until the Parkinsons drug L-DOPA was used to revive those still alive in the late 1960s by Oliver Sacks.

There have been only a small number of isolated cases in the years since, though in recent years a few patients have shown very similar symptoms. The cause is now thought to be either a bacterial agent or an autoimmune response following infection.