To understand cancer you should understand the basic facts about the human intestinal fluke. Its scientific name is Fasciolopsis buskii. Fluke means "flat", and flukes are one of the families of flatworms. On the next page is a photograph of the human intestinal fluke, made from a preserved and stained specimen so all the details are visible. It is as flat as a leaf. The parasite is not unknown, it has been studied since at least 1925.

This Is The Cancer Causing Parasite

This parasite has stages that it must go through to keep reproducing. The first stage is the egg. The adult produces millions of eggs. They pass out of us with the bowel movement. The adult, though, stays tightly stuck to our intestine (or liver, causing cancer, or uterus, causing endometriosis, or thymus, causing AIDS, or kidney, causing Hodgkin's disease). 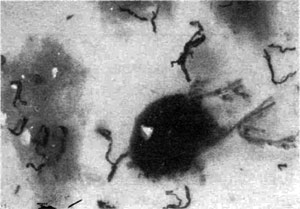 "Black hairy legs" are strings of eggs. Five flukes, in various stages of
decay, expelled from bowel. They float.

Most of us get little lesions in our intestines from time to time. These tiny sores allow the eggs, which are microscopic in size, to be pulled into the blood stream (other parasite eggs get into the blood this way too). Some of these eggs actually hatch in the intestine or in the blood. The microscopic hatchlings are called miracidia and are the second stage. They swim about with their little swimmer-hairs. And of course, the liver whose job it is to dispose of toxins, will receive them and kill them as the blood arrives from the intestine. They have no chance to survive in normal people.

BUT SOMETHING SPECIAL HAPPENS TO PEOPLE WHO HAVE ISOPROPYL ALCOHOL IN THEIR BODIES. The liver is unable to trap and kill these tiny fluke stages. These baby-stages are actually allowed to make their home in the liver and other tissues. It is as if the immune system has no power to kill them. The flukes begin to multiply in people with isopropyl alcohol in their bodies! The miracidia (hatchlings) start to make little balls inside themselves, called redia. But each redia (ball) is alive! It pops itself out of the miracidia and begins to reproduce itself. 40 redia can each make 40 more redia! And all of this out of one egg!

This parasite is laying eggs and producing millions of redia right in your body! In your cervix or lungs, wherever your cancer is growing! These redia are swept along in your blood, landing in whatever tissue lets them in. Smokers' lungs, breasts with benign lumps, prostate glands full of heavy metals are examples of tissues that give the redia their landing permits.

Life cycle of a fluke

Multiplying continues at a hectic pace, generation after generation. Redia are nesting in the liver and other organs. Suddenly they change their shape. They sprout a tail and can swim again. Now they are called cercaria. The cercaria only need to find a place to attach. After they glue themselves to your tissue, their tails disappear and they begin to grow a "cocoon". Now they are called metacercaria. Normally, this would happen on a leaf growing near a pond, so the metacercaria develop an extremely thick shell around themselves to withstand the winter. Does the presence of the solvent isopropyl alcohol in your body dissolve this tough shell? That would remove the last barrier to the fluke completing its entire life cycle anywhere in your body!

After the shell is gone, they grow into adult flukes in your tissue. NOT IN THE INTESTINE BUT IN YOUR LIVER! Now the cycle is complete. From egg to miracidia to redia to cercaria to metacercaria and then the adults! And all of them eating and sucking and devouring your vital body fluids. But this is not normal for flukes. Their normal life cycle goes like this:


1. Egg: Expelled with bowel movement onto soil. Washed by rain into ponds.


2. Miracidia: Hatches from egg in water. Has cilia, can swim vigorously and must find intermediate snail host in one to two hours or may be too exhausted to invade.


3. Redia: Develop inside miracidia as little balls until expelled. Those are "mother" redia, and each one bears "daughter" redia for up to 8 months, all still inside the snail, and living on the fluids in the lymphatic spaces. Similarly, daughter redia are continually developing cercaria.


4. Cercaria: Have a tail, use it to exit from snail and swim to a plant. If the snail is feeding on a plant, cercaria can latch onto plant with sucker mouth and start to encyst (form a "cocoon") within minutes. Tail breaks off and swims away to dissolve.


5. Metacercaria: Two-walled cysts. The outer wall is very sticky. But as you eat the plant it is stuck to, the least pressure will break it, leaving the cyst in the mouth. The "almost unbreakable" inner cyst wall protects it from chewing, and the keratin-like coat prevents digestion by stomach juices. However when it reaches the duodenum, contact with intestinal juices dissolves away the cystwall and frees it. It then fastens itself to the intestinal lining and begins to develop into an adult.


6. Adult Lives in your intestine and can produce 1000 eggs per bowel movement and live many years.

As you can see, humans typically are the host for just the adult stage, and then only in the intestine. But can you imagine the havoc in your body if you did the snail's job, too? As if these parasites were not fiendish enough, as soon as there are adults in the liver something new happens. A growth factor, called ortho-phospho-tyrosine7 appears. A monster has been born! Growth factors make cells divide. Now YOUR cells will begin to divide too! Now you have cancer.

Now You Have Cancer

The presence of ortho-phospho-tyrosine is the beginning of your malignancy. Unless you act quickly to kill this parasite spawning machine, it will take over your body. But first, let's sit back and think for a minute. Why is this parasite multiplying feverishly in your organs instead of living quietly in your intestine? Because having isopropyl alcohol in your body allows its development outside of the intestine. A parasite is simply doing what all living things must do: survive and reproduce. It is not the fiendish nature of this parasite that has given you cancer. It is the tragic pollution of your body with isopropyl alcohol that is at fault. And, of course, the infestation of our food animals and household pets with fluke parasites. But we will come to this later.

Purge The Parasite, Cure The Cancer

The good news is that when the fluke and all its stages have been killed, the ortho-phospho-tyrosine disappears. In 24 hours all ortho-phospho-tyrosine is gone! Your malignancy is gone. You still have the task of repairing the damage. But your cancer cannot come back. And you have won the battle for your life. BUT WHAT ABOUT THE BATTLE FOR YOUR HEALTH? Let us step back again into the nightmare of cancer.  Why do the microscopic fluke stages choose the cervix or prostate or lung in which to settle for reproduction? Perhaps it is because this organ has developed "safety islands" for them, namely, precancerous tumors. A benign tumor has lost its immune power for you, so that it cannot catch and kill the tiny invaders. After all, there is isopropyl alcohol present, and many other toxins as well. The heavy metals copper, cobalt and vanadium are there. Often mercury and nickel are there. Lanthanide metals like yttrium and thulium are there. These are known to cause mutations. Common toxins like arsenic from household pesticides are there. PCBs and Freon are there. Fungus is even growing there and producing patulin, a carcinogenic mycotoxin (carcinogenic means cancer-causing; a mycotoxin is a toxin produced by a fungus). Is it just a coincidence that the parasite survives and reproduces itself best in your most unhealthy organs?

Clearly, you must do 3 things:

1. Kill the parasite and all its stages.

3. Flush out the metals, common toxins, and bacteria from

your body so you can get well.